At just over half-a-mile west of the Grange-over-Sands town boundary on the B5277, the Pheasant Inn at Allithwaite (marked by a red arrow above) is a well-reviewed pub/restaurant that serves as the starting point for a popular walk to Humphrey Head - the whale-back-shaped limestone outcrop shown in the centre of the picture above. But despite most 'Allithwaite' walks targeting this natural viewing platform for Morecambe Bay's vista, the Pheasant Inn can also be used as the start of a delightful 7-mile walk taking in Allithwaite village, the famous Hampsfell Hospice viewing tower, and the chocolate-box village of Cartmel - home of sticky toffee pudding. This article describes that walk.

At the risk of repeating myself, the walk starts at the Pheasant Inn at Allithwaite, shown above. Well okay; so I've repeated myself! From here, head north a short distance up the narrow B5277 to the first road into Allithwaite proper: Black Orchard Road. Walk upwards through the village to Wart Barrow Lane, where we are going to turn right into and down this quiet lane. If you can't read a map well enough to find Wart Barrow Lane, now would be a good time to stop and ask yourself if you should really be going any further into the wilderness of Cumbria. There might not be fearsome dragons in the Lake District Peninsulas, but you will definitely need your wits about you as you work out which way up to hold the map.

As you leave the suburban bustle of Allithwaite behind you (okay, 'bustle' might be too strong a word for Allithwaite), the astute map-readers among you might notice that the corner of the field next to the last bungalow on your right, is the start of a public footpath. But where's the expected gap in the wall? Good grief; we have ourselves a farmer who has taken it upon himself to block up the entrance to the footpath! We can't be having this!

Those of you who, like me, are principled about such assaults upon one's God-given right to enjoy the countryside, will now climb the wall, being careful to avoid the barbed-wire running along the top. They will jump to the exact spot that the OS map shows is their right to jump to, puffing out their chest in readiness for an argument with the local landowner.

Those of you of a less confrontational nature, however, will carry on walking a short distance down Wart Barrow Lane, whereupon they will notice a very secure set of wall steps conveniently built into the dry-stone wall for the safe assent and descent of ramblers, hill-walkers and mountain climbers who have decided to take things easy for the day. Okay, so I might have been a bit too hasty to judge the local landowner!

Head north-north-west up the hill in front of you, and down the other side to a clearly-marked gate and footpath wall-gap. Now back onto Wart Barrow Lane, follow it east and then north-east as far as it will go, to the corner of Grange Fell Cemetery, where you need to go over the staggered junction and right, down Grange Fell Road shown by the yellow arrows below.

About a quarter-mile down Grange Fell Road, past Grange Fell Golf Club on the left, is a junction with a signpost pointing left to Spring Bank Farm - take this road uphill for another quarter-mile. Not far past the reservoir building on the left is a double-gate marked as a footpath entry. Go through this gate and a hill known as Fell End will be in front of you. Head north uphill to the right, keeping fairly close to the dry-stone wall on your right until you can see the regularly-trodden footpaths leading further up the hill to Hampsfield Fell. This hill, more generally known as Hampsfell, is crowned by Hampsfell Hospice, a robust limestone tower monument built in 1846 by the then vicar of Cartmel as a viewing platform and shelter from bad weather.

As you continue to climb the fell, you will eventually see the top of the hospice tower come into view, as shown beneath the yellow arrow above. Head directly to it and as you are now on open land, it doesn't really matter which route you take.

Inside the hospice are stone benches and painted boards commemorating its construction, praising the views and welcoming visitors. On the far side of the tower to that shown above are stone steps leading to the roof, which offers a 360° panorama view of Morecambe Bay, much of the rest of the Lake District National Park (which you are now standing in), Arnside Knott, the Kent Estuary and much more beyond. Hampsfell is, in fact, the subject of a whole chapter of Wainwright's book: The Outlying Fells of Lakeland.

Once you have rested and taken in the glorious views, head off due-west downhill from the hospice. Although the OS map shows a winding path downwards, good luck trying to find it! In practice, just keep walking west until you are able to see a view like that shown below. Note the view, pick your first target (a wide gate indicated by the lowest arrow), then try to keep to the route indicated by the yellow arrows as that is the only route that you have a right to follow.

Err towards the left as you descend, then, if you get to the wall at the bottom of the rough ground but are unsure of your position, simply walk right until you find the gate. Go through it and head left to follow the field's perimeter as shown above. Note the race horse training run just over the next wall, visible in the above photo. Go through the gate indicated in red above, and at the next gate your view will look like this...

The buildings opposite belong to a holiday cottage and wedding venue called Longlands, and the interior of the walled garden on the left can be seen through a viewing window set into the wall. The public footpath runs directly from the gate in the foreground, through a wall-gap and gate opposite, then to the left of the buildings and out onto the road into Cartmel via the Longlands driveway. Once at the end of the driveway turn left and follow the Aynsome Road for about half-a-mile, all the way into Cartmel.

Cartmel village, originally called Kirkby in Cartmel, is the location of the 12th-century Cartmel Priory. The place-name means 'sandbank by rocky ground' and appeared in the Pipe Rolls of 1177. More recently the undeniably picturesque chocolate-box village has become known as the 'home of sticky toffee pudding', and it has a racecourse which hosts meetings two or three times a year. Needless to say, Cartmel is very popular with tourists, especialy in the summer, so you'll be pleased that you don't have to try and find a parking space.

For a whistle-stop tour of the heart of the village, turn right into Priest Lane as you enter the village, and follow the narrow road past the church on your left, round the bend and into Cavendish Street. Walk down to, and under, the arched gateway at the end, and into the main square. If you'd like to see part of the racecourse, turn right and follow the road to the immeadiate left of the post office. Otherwise turn left and follow the path to the immeadiate right of the Kings Arms, over the very recently built Ford Footbridge, from where I took the photograph above.

As you exit the village centre, you will see the following road sign indicating that Grange (over Sands) is to the left, and Cark is to the right. Take the road to the right.

The next road junction you'll come to features a tree planted, so a notice declares, in 1953 by the local Brownies to commemorate the Queen’s coronation. Go straight over this junction in the direction, so another sign declares, of Lancaster-over-Sands and Allithwaite.

In case you're wondering (go on: wonder), some google-research suggests that Lancashire the county used to be divided between the main part of Lancashire as we know it today (roughly) and a section north of Grange-over-Sands called Lancashire-over-Sands. But that is not 15 miles away, so this old road sign suggests that Lancaster the small city was once known as Lancaster-over-Sands. But the only surviving reference to this old place-name seems to be the signage in Cartmel like that shown above. Hmm - more research is needed, me thinks.

Anyway, back to the walk and you now need to follow the main Allithwaite road but do not follow it to the left when you see the huge 'sharp bend' road signs. Instead, keep ahead straight alongside the Pastures holiday lodges, keeping to the west of Allithwaite, ignoring any junctions or roads bending westward. You'll soon find yourself on Locker Lane which runs downhill to the B5277 but not before it reveals its beautiful views of Morecambe Bay and Humfrey Head. Like this one...

At the bottom of Locker Lane, turn left onto the B5277 and walk the quarter-mile back to the Pheasant Inn for a well-earned pint and meal. 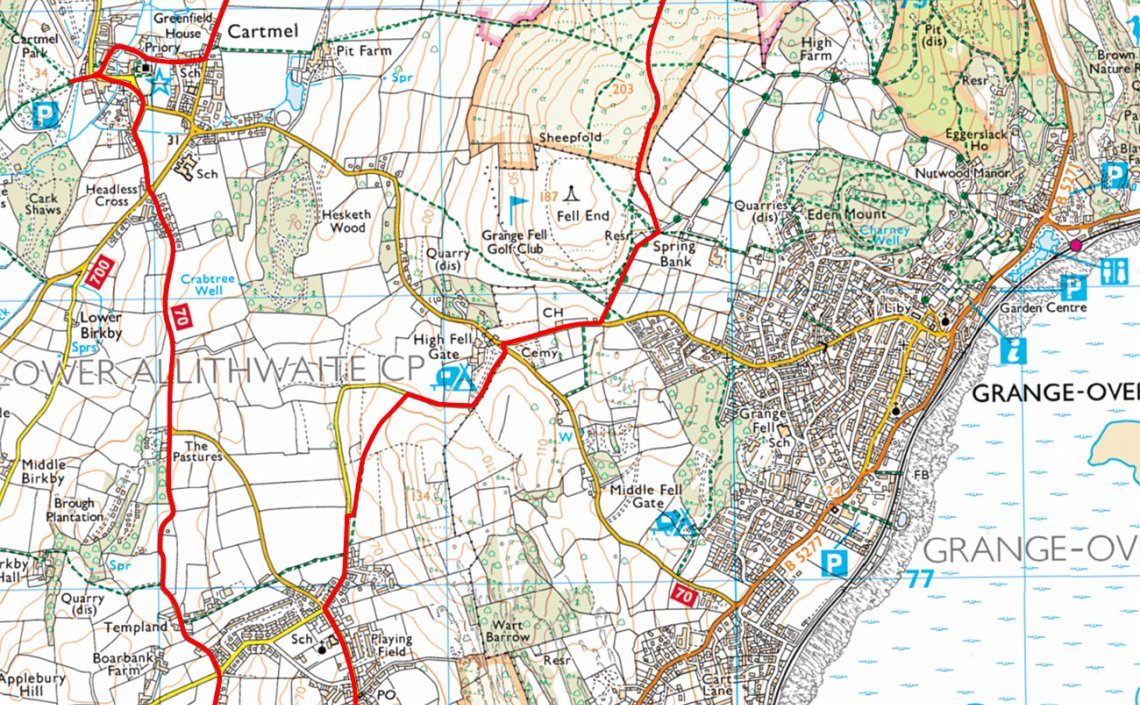