As with the 7-mile circular walk published last week, this walk starts and ends at The Pheasant Inn in Allithwaite. It takes more-or-less the same route, but this time in a clockwise direction with a slight change at Grange Fell. The anti-clockwise route features many gradual uphill sections and two steep descents, whereas this walk features two steep ascents and lots of gradual descents. That makes this walk just a little bit more of a challenge on your legs than the other walk.

The Pheasant Inn can be found just over half-a-mile west of the Grange-over-Sands town boundary on the road to Ulverston, south of Allithwaite's main village. The picture below shows the B5277 looking west from the Pheasant Inn, and this is where we begin our journey to Cartmel.

The B5277 runs uphill for a short while, then downhill as a single-width carriageway with red tarmac. Just as the road starts to track uphill again, turn right at the crossroads onto Locker Lane. Follow this narrow lane uphill and don't forget to keep looking behind as you climb ever upwards - the view over Humfrey Head and Morecambe Bay is quite spectacular on a clear day. The best view can be had just before the first row of bungalows that you come to on your right.

As you reach the top of the hill you will see what looks like a country hotel in the distance on your left. This is Boarbank Hall, home of the Cannonesses of St Augustine - a community of Catholic religious sisters who live their lives on the ideals of unity, love and compassion.

Cartmel comes ever closer into view as you descend towards it, looking every bit like the quintessential picture-postcard English village that it is. On a clear day like that shown above, the mountains of the Lake District National Park provide a spectacular back-drop to your descent into this 'home of sticky toffee pudding' with its popular racecourse and visitor-targeted businesses.

At the end of the road from Allithwaite, running perpendicular to it, is a road called Headless Cross, which is a name unique within Great Britain, as it happens. Cross this road and head left alongside the stone cross and weathered tree, which was planted, so a plaque tells us, in 1953 by Cartmel 1st Brownie Pack to commemorate the coronation of Queen Elizabeth II.

As you come to the main churchyard on your right, take a left into Ford Road, which leads you to a delightful little footbridge built just a few years ago to keep pedestrians away from traffic on the main bridge a few yards further up the River Eea. Cross the footbridge and bimble around the Square with the tourists that are bound to be plentiful if it's a nice day. At the far end of the Square is an archway on the right, leading into Cavendish Street, home to a 450-year-old coaching inn called the Cavendish Arms.

On the day we took these pictures, the (hopefully) last pandemic lockdown was doing its worst to the UK economy, but the first signs of spring were trying their best to be noticed and the sun reminded us that life can get better. The landlord of the Cavendish Arms, Richard English, was looking forward to the end of the lockdown when he could open again, and was excitedly keen to tell us about his charming low-beamed hotel and bar. Being new to the area, we can't say if the pub is as good as it sounds, but we look forward to finding out during the summer ahead.

Follow Cavendish Street round to the right as it becomes Priest Lane, past the back of the church and all the way along to Aynsome Road. Turn left and follow the road out of Cartmel for about half-a-mile until you see the entrance to Longlands holiday cottages and wedding venue.

The Longlands driveway is also a public footpath so follow it all the way to the main buildings, turning right in front of the first cottages you come to. Carry on walking past the walled garden on your right until you come to the gate and a wall-gap shown below.

Stop and familiarise yourself with the long climb before you, shown by the yellow arrows above which oddly enough are not marked out in the fields to guide you. The public footpath runs across the first field, through a gate, alongside a hedged field perimeter on your right, and then through another gate by a tree. From there you need to exit the field from a gate directly opposite you uphill, but the footpath follows the field's perimeter so you must too. As you ascend the field, look north at the mountains before you - aren't they majestic...

Once you've found the gate/gap in the top-wall, keep heading upwards roughly in line with the path you took as you left Longlands behind you. Those of you more used to climbing mountains will find some comfort in the familiar sound and feel of scree underfoot, but make the most of it as this is the only scree you'll find on this walk! If you're not sure exactly which direction to climb in, you might notice a small double-outcrop of rocks that stand out from the grass around them - head upwards towards and past them. Again, look around you as even more of the Lake District's commanding mountains come into view...

The first you'll see of Hampsfell Hospice shelter and viewing platform will be the guard-rails on its roof, which will appear at first to be sitting on some of the limestone 'pavements'. But keep on climbing and the rest of the tower will reveal itself.

Hampsfell Hospice was built in 1846 by the vicar of Cartmel as a shelter for travellers. Inside are benches and painted boards commemorating its construction and praising the views. Stone steps lead to the roof which offers a 360° panorama view of Morecambe Bay, much of the rest of the Lake District National Park (which you are now standing in), Arnside Knott, the Kent Estuary and more beyond. Hampsfell is the focus of a entire chapter of one of Wainwright's books of walks.

Once your legs have recovered from the climb up from Longlands, and you've taken in the fabulous views, head south-south-west back to Allithwaite following the paths shown above. Keep to the high ground and you can't go wrong as the vista in front and around you proves that tiny photos on a web page really don't do the South Lakelands scenes much justice.

The last hill-top on your journey south, Fell End, is topped by a stone cairn and marks your descent to the outlying houses and bungalows of Grange-over-Sands. The image below shows the path down the hill, that runs into the corner of the plot where you'll find a wall-ladder to take you back to civilisation via a short stretch of Spring Bank Road.

Walk down Spring Bank Road and right onto Grange Fell Road. Pass the golf club on your right, and Grange Fell Cemetery on your left, to the junction with Haggs Lane. Then cross the staggered junction as shown below.

Follow Wart Barrow Lane along and round the bend to the right, then near the top of the ascent you are now making, you'll find a gate and wall-ladder on your left. Cross the wall and head uphill in the direction of the footpath sign. Follow the contour of the land around the hill on your left, and you should soon then see the following view out to Humfrey Head and Morecambe Bay.

The wall on your right is topped by barbed wire, so you need to find the stone wall-ladder to help you back onto Wart Barrow Lane. It is under a particularly large tree highlighted above, and is clearly marked by footpath signage. The path downwards is fairly easy to see in the winter, but it might get lost in the grass-growth of warmer months.

Follow Wart Barrow Lane up and into Allithwaite village, where you need to turn left onto Church Road and follow it down past the church and school. Before you reach the main road from Grange, the B5277, fork right onto Black Orchard Road. This also leads to the B5277 but avoiding some rather tight bends with no footpath. Almost finished now; just a few hundred yards down the road and the familiar sight of the Pheasant Inn marks the completion of your outing into some of the prettiest parts of the Lake District Peninsulas. Have a drink; relax. 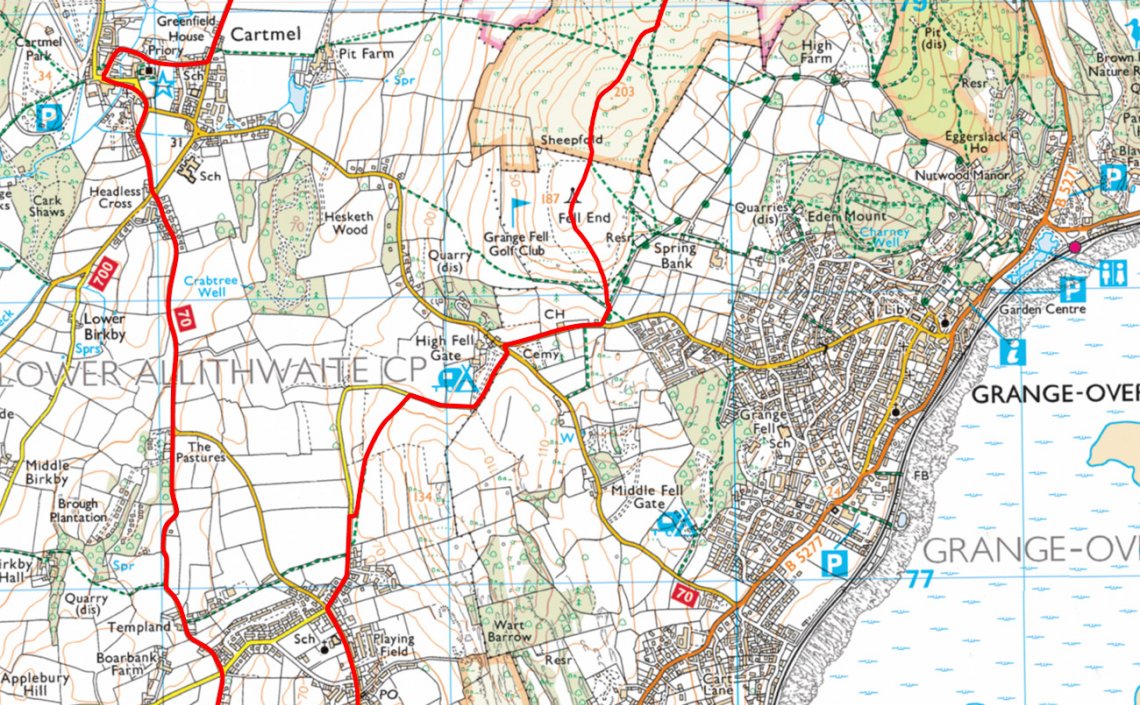