The Ponderosa Cafe, a popular destination for day-trippers and bikers, sits at the top of the Horseshoe Pass on the A542 between Llandegla and Llangollen. As well as providing food and drinks for those who come to take in the views and show off their cars and bikes, it also serves as a popular starting point for walks in the area as there is plenty of off-road parking opposite the cafe's sizeable car park (shown below on a typical Sunday). The Ponderosa is the ideal place to fuel-up with a protein-packed breakfast prior to starting a long walk, or even just for a cup of tea or coffee before you hit the trail.

Seven miles away on the sunny side of the River Dee, lies the small village of Carrog, with its heritage steam railway station, beautiful Dee Valley views, and charming pub and beer garden: the Grouse Inn. This traditional Welsh inn is run by a tutor at an award-winning catering college, so the food is always plentiful and tasty - the perfect lunchtime stop for a day's walking in the Welsh hills.

This article describes a 14 mile walk that starts and finishes at the Ponderosa Cafe, with a stop off at the Grouse Inn for lunch and a pint. The first half exactly follows nearly a quarter of the route of the LLangollen Round Challenge, a 33-mile walk undertaken in a single day by super-fit walkers who raise money for Cancer Research UK. Last year they raised over £45,500 between them! Because the walk to the Grouse follows part of the LLangollen Round, you can use the event's waymarkers to help keep on track. They are white discs with black arrows, inside of which is the round event badge/logo.

Whilst this article explains tricky parts of the walk in detail, it assumes that you have a proper Ordnance Survey map of the locality with you, and that you are experienced enough to follow both waymarked and non-waymarked tracks across fields and open ground. If you are unsure what to wear or take with you when hill-walking in Wales, you might like to read this article.

At 400m above sea level, the Ponderosa Cafe is already considerably high up, but we start our walk with a short, 148m climb in a south westerly direction to the top of Moel y Faen, where the fabulous views take in Snowdonia to the west, Rhyl and the Irish Sea to the north-west (shown below), the Dee Estuary to the north, Staffordshire to the east, and historic LLangollen nestled in the Dee Valley to the south. Lots of day-trippers make the short climb to this scenic viewpoint, but we're now going to leave them behind and push on over the Llantysilio peaks lined up before us, waiting to be conquered for the marvel of their panoramic 360° views.

The Llantysilio peaks are the toughest part of this walk but you can't get lost because peak-to-peak paths have been torn into the hills by off-road bikers, few of which are seen these days, I am pleased to add. These thoughtless joy-seekers (and I speak as an ex trail-bike rider myself) have even carved an ugly race-circuit into the side of the archaeologically important Moel y Gaer hill fort, which you will see when you negotiate these proud hill-tops. As you descend the scree of Moel Morfydd (shown below is Llangollen from Moel Morfydd), the last of the peaks, the main path bends off to the left, but you need to follow the tractor path dead ahead, which leads to the narrow, tarmac Glyndyfrdwy-to-Bryneglwys road. Turn right onto this road and follow it a short distance to a gate and cattle grid.

That's the tough bit over with!

Head west (left) at the gate and follow the Clwydian Way, keeping next to, or within sight of, the boundary fencing between the private and open lands. After about a mile from the cattle-grid, the path splits ahead of you. It doesn't matter which way you go, as long as you end up at a modern gate which is either to the right of the left path, or to the left of the right path. Look for the white Llangollen Round waymarker disc on the gate's hinge-post. Go through this gate and head down to the A5104 Brynelglwys-to-Carrog road. Turn left and walk a few metres along the road, then left again at the bridleway sign, into a large hill-side field which is still part of the modern Clwydian Way. Walk up and to your right, aiming for the middle of the row of trees and hedges on the horizon.

A gate and stile marks the start of the ancient part of the Clwydian Way drover's path, with trees lining the trail all the way to Bwlch Coch (red gap). Just keep within the two lines of trees and you can't really go wrong. The path can become a little overgrown in the summer in places, and patches of tall nettles are best negotiated in trousers, not shorts, but a regular footfall of walkers ensures that a visible path through the overgrown parts of the trail can always be found. As you pass the stone ruins of drover's huts and overnight sheep pens, you'll realise that you're treading a route that pre-dates most of the roads that make up the modern highway system. The peace and tranquility of nature envelops you as buzzards circle overhead and kites swoop low down in the valley to your right; for you are in the heart of the countryside now, far from busy roads and suburban jungles.

As you emerge from the ancient tree-lined section of the Clwydian Way, go through or over the gate ahead and keep to the left of the dilapidated dry-stone wall as it bends round to the left. Go though or over the first gate that you come to on your right, and walk towards the Dee Valley that should be opening up before you. If the weather is calm, stop and take in the silence for a moment - few places we know are quite this quiet. You'll likely hear the whistle of a steam train every now and then, and buzzards calling to each other across the valley sides, but other than that the silence is deafening. Look for the top of a Chestnut tree poking up from the field's horizon, and head towards it (shown below). Note the naturally-formed seat of rock below this tree, for this is where you'll take a break in a few hour's time. For now though, walk past the tree and down the path to the stile on the edge of the forest before you.

If this part of the hillside had a name, it would be called Silver-Oak Down, for growing out of the lush ferns all around you are hundreds of silver birch and oak trees, forming a high canopy and offering tantalising glimpses of the River Dee below and to your left. As you descend down the soft, loamy path, know that lunch and a cool pint of lager or Guinness is only minutes away now. Take care during the last short downhill section as it is steep and slippy underfoot where so many people have gone before you in search of the views by the Chestnut tree. As you emerge from a very short section of overgrown path, the beer garden of the Grouse Inn invites you to stop and take in the majestic River Dee in all its glory (shown below). Enjoy your lunch.

Before you leave the Grouse, psyche yourself up for the climb through Silver-Oak Down, and buy a bar of chocolate as an incentive to enjoy when you reach the top. Retrace your steps up the hill and find the rock-seat by the Chestnut tree. Enjoy the views and your chocolate treat - you've earned it. At this point you'll be wondering how you can possibly find the energy to make it back to the Ponderosa, but worry not, for after the next short climb through the field behind you, it's all more-or-less gently downhill to Bryneglwys, which is far more easy-going in its entirety than the steep climb you just made.

A touch of déjà vu

Retrace your route through the ancient Clwydian Way, and head on down the hill to the A5104. But from here, unless you are feeling particularly fit and fancy going back via the Llantysilio peaks (they have steeper climbs in the opposite direction), stay on the road to Bryneglwys (shown below). The A5104 is only used by residents and farm traffic, so on a weekend it is quite common not to see a single vehicle or person all the way to the village, only sheep, horses, cattle and buzzards. Walk through the outlying buildings of Bryneglwys, past the war memorial in the centre, and turn right just before the stone bus shelter that was built in 2009 with a level of craftsmanship that is rarely seen anywhere these days.

Walk up the hill, past the white cottage named Bryn Tirion (pleasant hill), and do what most people do, which is to dream of living in such a beautifully idyllic home. Carry on to the t-junction and turn right up the hill, then left at the next junction by the solitary farmhouse. Less than a minute or so down the road, and you're looking for the entrance to Pen Bedw Farm on your right (shown below). Go through the gate and up the long, twisty drive (also shown below). Please respect the fact that you are approaching someone's home, as the landowner has had problems in the past with trespassers. Just before you reach the buildings, break left, down a path and round to the corner of the field, which will be out-of-sight before you round the bend. Go through the gate, follow the track, through the next gate, then head for the stile that is visible on the far side of the field before you. Climb over the stile and then head uphill into the upper-left corner of the field, to the left of the ruined out-building. You are now looking for a modern gate on your right, which you should go through and head south-east, following the gully with the fence on your left.

Author: Roy Sinclair was taught fieldcraft, navigation and meteorology during his career in the RAF, but claims to remember little beyond the alcoholic haze of a serviceman's social life in the eighties! Roy now lives on the side of Llantysilio Mountain in North Wales, and enjoys hillwalking to keep fit and strengthen his body after major spine surgery. G+

Should we run one website or many for our various business interests? 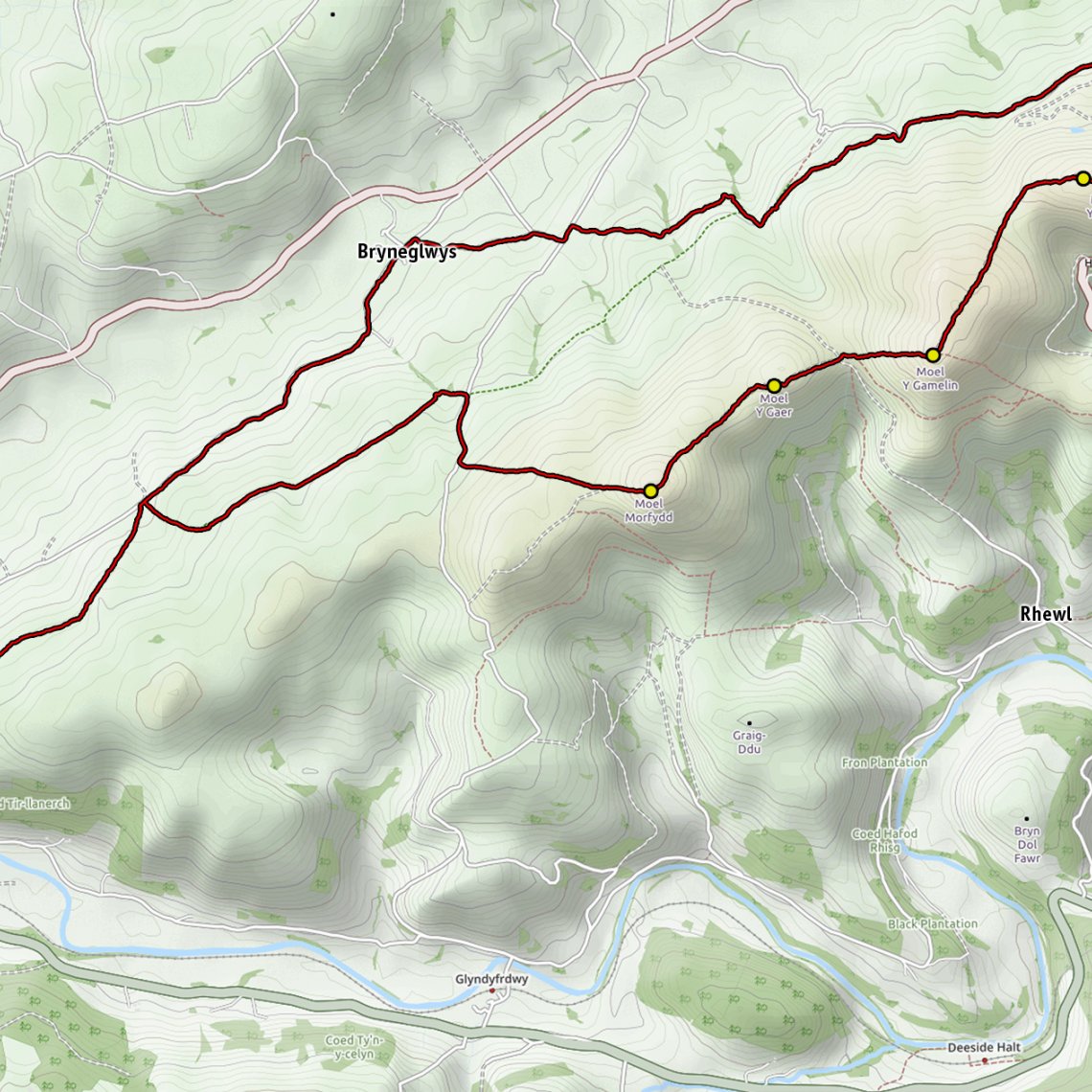