The Dee Valley (shown below) is such a picturesque location that there are already dozens of well-documented walks in the vicinity of Llangollen and Corwen. However, this article describes a challenging day out that you might not have considered before, incorporating: the Llantysilio peaks of Moel Gamelin (577m) and Moel y Faen (548m), that form part of the famous Horseshoe Pass; the renowned Ponderosa Cafe, where it is not uncommon to find senior ladies sharing tea and scones, next to leather-clad bikers and vintage car buffs; arguably one of the most beautiful sections of the Clwydian Way, opposite the Horseshoe Pass; parts of Offa's Dyke Path, one of Britain's best known National Trails; the rugged escarpments of Eglwyseg Mountain; the spectacular scenery around World's End; and the commanding views of North Wales and beyond from Sir Watkin's Tower atop Cyrn-y-Brain (563m). Few walks, I suspect, can boast such a varied collection of stunningly picturesque locations.

The walk starts and finishes in the tiny Denbighshire village of Bryneglwys (shown below), on the side of Llantysilio Mountain, five miles north of Corwen. Bryneglwys, meaning 'hill church' or 'church on the hill', dates back to at least 1284, and includes within its environs, the ancestral home of the Yale family. It was Elihu Yale who, in 1718, helped establish Yale University in Connecticut, USA, by donating the proceeds from the sale of nine bales of goods, together with 417 books and a portrait of King George I. Parking is not a problem in Bryneglwys - use the car park next to the old school - but mind the feral peacocks that often use the village roads like a catwalk on which to strut their stuff.

Whilst this article talks you through tricky parts of the walk in detail, it assumes that you have a proper Ordnance Survey map of the locality with you, and that you are experienced enough to follow waymarked tracks across fields and open ground. This is not a walk for those new to the concept of map reading or orienteering. An Open Source map of the route can be found on the right of this page (or further down if you're using a phone or tablet).

From the village school, walk up to the war memorial and turn left towards a beautifully-made stone bus shelter. Just before the shelter, turn right up a narrow lane with high hedges, and follow this past the white cottage, Bryn-Tirion, all the way up to Plas-newydd farmhouse. You will be faced (at the time of writing) with a gate bearing multiple, large red and yellow 'road closed to vehicles' signs. Go through this awkward gate and follow the sometimes muddy track all the way up to the stile at the top. From here, pick a path through the gorse patch, up the hill and slightly to your left (ignore the sheep-track), then through the gate and onwards to another stile, which in turn leads you up a sunken path to a locked gate. This needs to be climbed over as the landowner has had problems with off-road vehicles tearing up his land. You are now on the ancient Clwydian Way.

Turn left and follow this stone-covered track up to the junction of the path that intersects all four of the heather-covered 'Llantysilio peaks'. Turn left and climb this path (shown left) to the 577m peak of Moel Gamelin. Proper walking boots are strongly recommended, as the track is steep and covered in loose scree. From here, on a good day, you can see Snowdonia and Snowdon itself to the west, Llangollen and the meandering River Dee to the south (shown two pictures up), the prominent Eglwyseg Escarpment to the west, and the long Vale of Clwyd and the Clwydian Range to the north. Continue on this path over the 548m peak of Moel y Faen and down to the Ponderosa Cafe (last picture below) for a morning coffee or cup of tea.

Leave the cafe on the back road heading southeast and almost immediately pick up a path heading east-southeast off the road. You are now back on the ancient Clwydian Way (shown below is the view you'll have), which is very clearly marked on the OS map. We refer to part of the walk along here as 'Hobbitshire', for reasons which will be obvious when you see the lush carpet of grass and moss before you. Follow this scenic path past (up and to the left of) the occupied Bryn-yr-odyn, alongside the ruins of Cae'r-hafod, through the sheepfolds, past the idyllically isolated but still-in-use cottage called Glyn, and down to the Eglwyseg road junction by Plas Yn Eglwyseg.

Walk across the road junction and over a stile, but track left alongside a modern house and over a stile and stream, as the footpath has clearly been diverted at this point. Follow the stream uphill, then track north to follow the tree-line of the woods at the top of the second field. A waymarker points the way through a gate to your right, over a stile and onto the Offa's Dyke Path. The OS map suggests that this path follows the boundary fence north along the Eglwyseg Escarpment, whereas we want to be following the path part-way up the escarpment, which is not shown on the OS map. So turn right once over the stile (or through the gate if you missed the stile), then up-hill and double-back to the north on the narrow path that looks to be the most well-trodden.

Follow this narrow and slightly precarious path along the escarpment as it very gently climbs in altitude (shown below), over a stream and beneath Craig Arthur, where it rejoins Offer's Dyke Path for a short while. At the recently added waymarker post, take the higher of two paths, further up the escarpment, which eventually starts to widen and flatten out onto grass, making for an lovely hill-top spot to rest and enjoy the views whilst eating lunch.

World's End - time to head back

The path now heads east at a boundary fence, and then all the way around the top of World's End. There are various paths intersecting the route in this area, so stay sharp and ensure that you end up on the World's End to New Broughton Road, not further east beyond the end of World's End! As we join the road, we pick up the Offa's Dyke Path again, which means following the tarmac uphill for about half-a-mile before tracking northwest at the National Trail signpost. Head out across the heather and bogs on a convenient boardwalk-type path made from old railway sleepers. When this path meets the fenced boundary of Llandegla Forest, go through the gates and follow the boundary-line southeast, over a stile and up to a small signposted detour to the right, which takes you to the remains of Sir Watkin's Tower. Enjoy the view, which takes in the River Dee Estuary to the north, and the city buildings and docks of Liverpool beyond that.

From the remains of the tower, back-track to the main path and continue southeast past two huge aerial arrays. Bala and Snowdonia should be in front of you, and the Clwydian Range to your right, with Ruthin nestled centrally in the Vale of Clwyd, and Rhyl out of sight beyond. Carry on down the rough road built to service the wireless station, then cut across to the Ponderosa (shown above from the opposite side) for an afternoon cup of tea or coffee. Make the most of the rest, for ahead of you is the last stretch of four miles, which begins with a steepish climb and retraces the path you took in the morning, returning you to the quiet village of Bryneglwys the same way you came out. Unfortunately there is no pub or restaurant in the village, but Corwen is only ten minutes away by car, and the town has plenty of nice pubs and an award-winning Indian restaurant called Abul's Spice, which is highly recommended after a hard day's walk.

What is Corporate or Brand Identity? 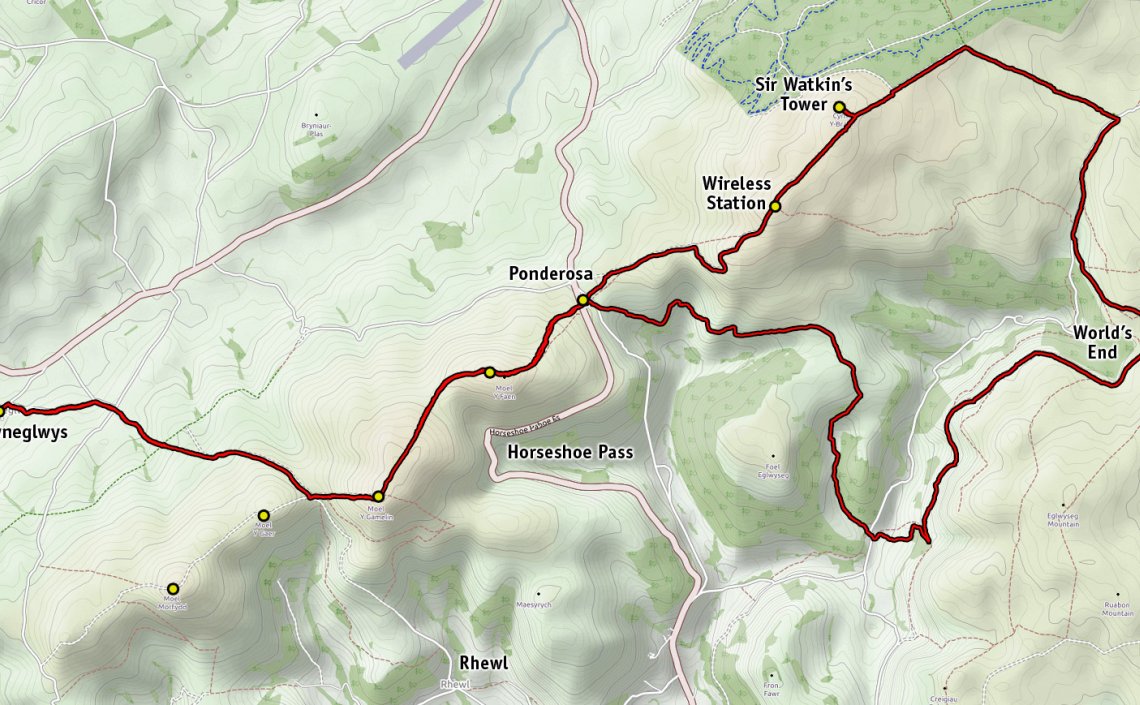 Please note that this walk can be completed as a shorter, ten-mile version, starting and ending at the roadside parking space opposite the Ponderosa Cafe.