At seven miles long and around 60m deep, Ullswater is the second largest lake in the Lake District. As you can see from the photo above, even on a cold spring day with hazy sunshine and snow just a few hours away, the views are still stunningly spectacular and well worth a climb up one of the lake's many surrounding fells (hills) to marvel at nature's magnificence.

One such area of excellent viewpoints can be found on the sides and at the top of Gowbarrow Park and Fell, and the bonus with this popular circular route, is that it incorporates the most famous of Lake District waterfalls: the 70-foot high Aira Force. The name, if you're interested, comes from the Old Norse words á, eyrr, and fors, which together translate as: "the waterfall on gravel-bank river".

The route around Gowbarrow Park is, as I said, fairly popular, but at only 4.5 miles, it is a little on the short side for those who like to stretch their legs a little further. So today's walk starts at the Grade II listed Watermillock Church, built in 1881 to replace the previous church which was built in 1558 to replace another that was burnt down by Scottish raiders. On the roadside directly outside the church is room for about five parked cars, plus the lanes leading up to the church have wide verges in places if you don't mind parking on grass or mud.

Assuming you manage to bag a parking spot outside the church, walk north uphill for about 250m where you will notice that a well-signposted public footpath tracks left and right of the road. Take the path on your left.

Ordinarily I post lots of photos of the routes that I publish, so people will not get lost. In this case, even if the hillside was covered in fog, you would still be able to confidently follow the route all the way up to Gowbarrow Fell as the National Trust has done an excellent job of maintaining the path and its associated signage.

The route down from Gowbarrow Fell may or may not be so straightforward as you have a choice that we will get to soon: rejoin the National Trust's woodland walk from the west, or follow a very quiet route back via Great Meldrum and the non-footpathed edge of Swinburn's Park forest.

The photo above was taken about half-a-mile into the walk proper, looking back at Watermillock Church. Note how well kept the path is.

Whilst on the footpathed route through Swinburn's Park you may spot any of three Herdwick Stones which, as the accompanying plaques explain, celebrate the role that shepherding plays in the Ullswater Valley, as well as the region’s much-loved Herdwick sheep, which are thought to have been introduced by the Vikings.

The words thereon - Yan, Tyan and Tethera - represent one, two and three in a special counting system of Celtic origin. These particular spellings, I have found out, are from the Scottish dialect, but are nonetheless traceable to the Keswick area. Wake up! ...we have a walk to get on with!

Swinburn's Park is rife with birdsong and an absolute pleasure to stroll through (shown above).

A gate marks the end of this tranquil stage of the walk, beyond which is the eastern side of Gowbarrow Park (shown below). Walk up and to the left, through the gate in the wall, and turn left.

It is worth noting that if you later choose to return to the church via the same path that you have just walked down, you will, once you descend from the top of Gowbarrow Fell, find yourself approaching the scene below from the direction marked by the red arrow. Should you miss this important exit-point in the wall, you may find yourself walking round in circles, wondering why the second tall waterfall you've seen looks so remarkably similar to the last one!

Now we come to the gobsmakingly beautiful vistas that are 'Ullswater from Gowbarrow'...

Time for reflection (no pun intended) and there is even a memorial bench on which to sit and take in the views ...or any old moss-covered rock will be equally as good if you haven't discovered the bench yet!

The path tracks down some rock-fashioned steps, where you will probably encounter tourists fresh off their coaches in their finest holiday clothes and shoes, wondering if they'll be able to climb the steps without having a heart attack. Smile and be nice, because your steep ascent of Gowbarrow is yet to come!

The path leads to a gate and the sound of falling water, but where to go? ...straight on? ...no; turn right through the gate and follow the path uphill until you spot one of two bridges across the gorge to your left.

In the 1870s, the Howard family of Greystoke Castle (yes, there is a tenuous link with Edgar Rice Burroughs’ Tarzan story) owned much of the land around where you are now standing. They landscaped the area around the Force, and used it as a pleasure garden. They planted about half-a-million-and-three native and ornamental trees, and established a network of footpaths and bridges.

Gowbarrow Park, including Aira Force, was bought by the newly formed National Trust in 1906, thanks to which the nation can now enjoy the fruits of the Howard's labours.

Be careful of straying off the footpaths to see the view above-left, as the ground can be slippy and the drop would probably result in cries of 'ouch' and rather a long period of hospitalisation.

Once you have had a good look around Aira Force, walk uphill to the gate shown below. Go through the gate and follow the path uphill due north. There is another gate to the left of the image below, so be aware that if this is where you end up exiting the Force, you'll need to turn left.

As with the rest of the route around Gowbarrow Park, the paths and signage are obvious. Follow the track north until you see a sign pointing up and to your right as the way to Gowbarrow Fell.

There's no way to soften the climb short of sprouting wings and flying up! It is a bit of a steep-slog, but you're doing this to keep fit are you not!

Keep going until you reach the trig-point shown below. Once you have admired the even-higher view of Ullswater that your efforts are now rewarded with, take a moment to decide which route back you wish to take. To follow my route exactly, walk ahead and down the summit's peak. It's a bit steep here, so you can always back-track down to the path and follow that round if you prefer.

In the distance shown below is a right-angled wall with a step-style, which then leads up and over Great Meldrum. All of this is open-land, but the final leg of my route is - in a marked exception to my normal rule - forestry land, of which we will track alongside the perimeter. The forestry land is very open (following a recent felling) and has a well-used path. In fact it is the exact-same forest that you walked through earlier, but if you'd rather not risk being told off for not keeping to the footpaths then simply follow the park's footpath and return as discussed earlier.

From further down the side of the fell, the path up to Great Meldrum looks like this...

Once over the top of Great Meldrum, head for the corner of the open land (shown below by the largest arrow) and look for a wooden step-style over the wire fence. Follow the path north-east alongside the forest's perimeter to a logger's road and gate, after which the logger's road runs down to the same road that you are probably parked on. If you like the silence of traffic-free Ruralshire, you will understand why I like this route, even though the final section is not open land.

Turn right and follow the public road all the way round and down to the church, or wherever else you managed to park your car.

Was it worth it? Did you enjoy it? If so, please let me know by submitting a comment below.

What is the Metaverse and how will it affect my business?

Should we run one website or many for our various business interests? 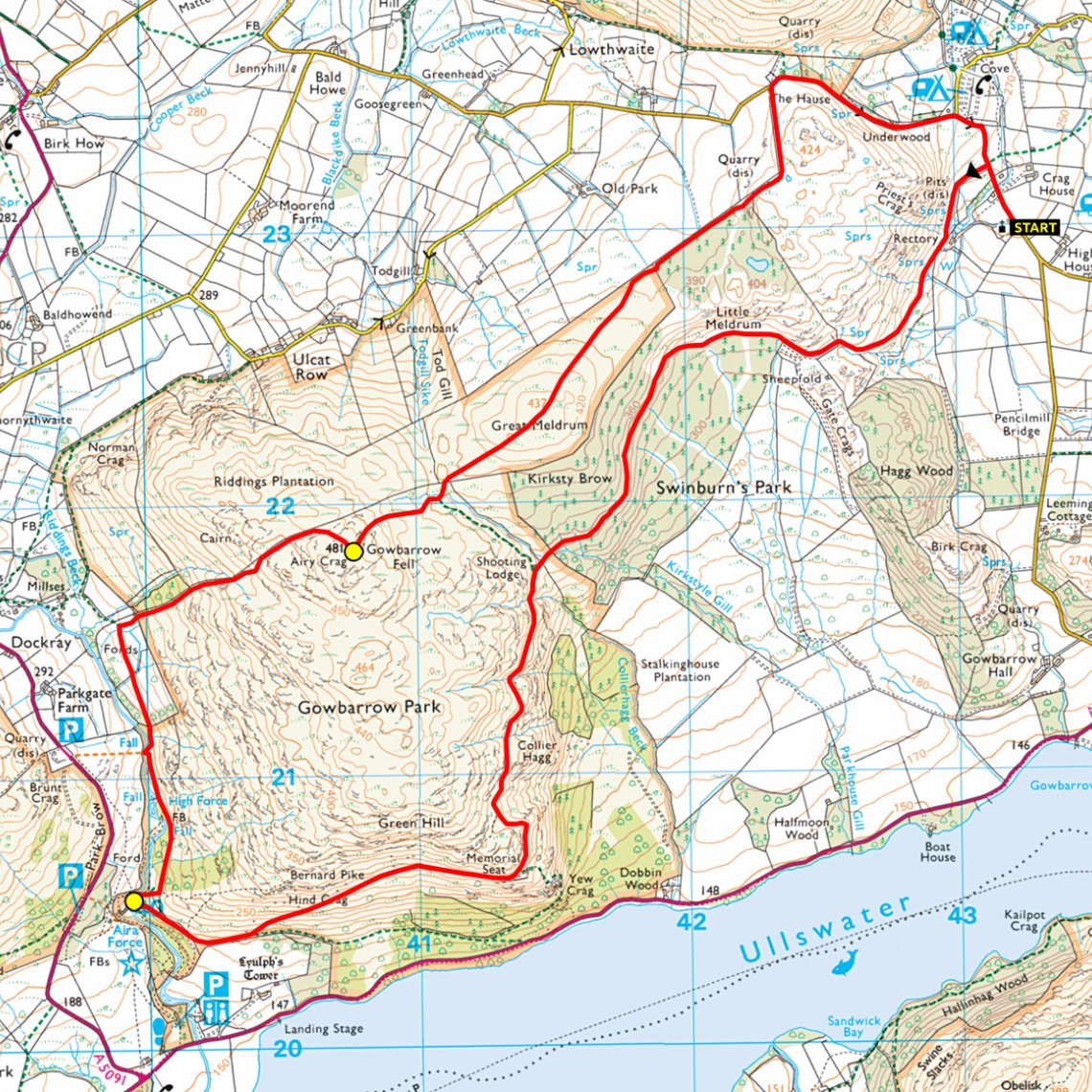